Mother posts pictures and a scary story on social media and asks everyone to share it. Panic ensues.  Everyone clutches their own children a little tighter… But, ultimately, everyone sleeps better knowing they are good, concerned citizens who have made the world a better place…

…and that Dad and his buddies have the tools necessary to take care of The Problem if a suspicious person makes the mistake of driving slowly near his son again:

This is how the tale is supposed to go…

But–sometimes–with no warning, the well-rehearsed story can take an unexpected turn.  Sometimes the police investigate and discover the person that everyone wants to throw in jail or shoot wasn’t actually trying to kidnap anyone’s child after all. 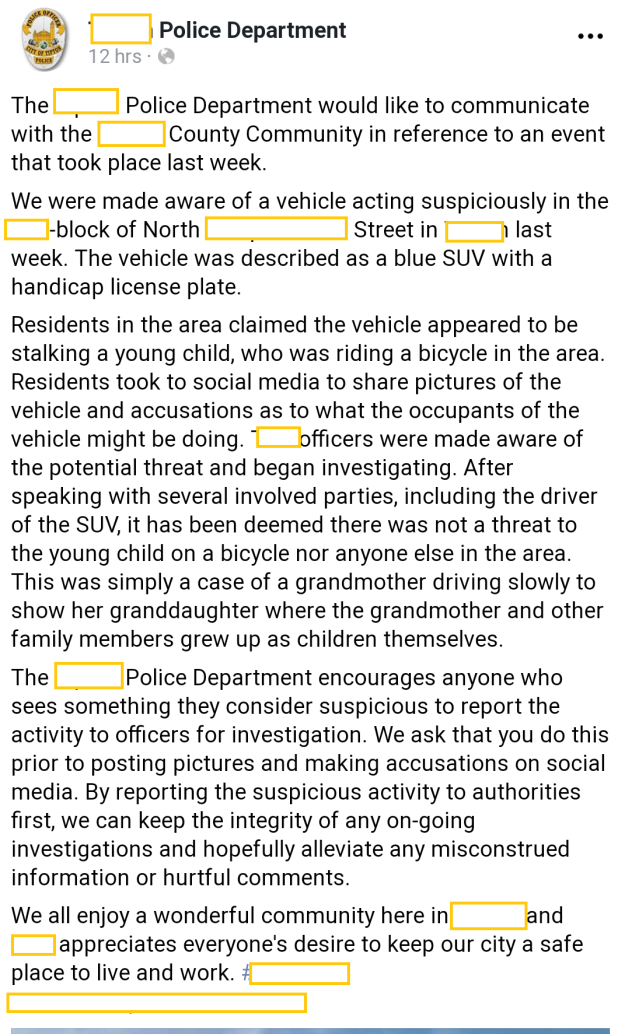 Now, reader, you might be thinking:  “EGAD! That’s not how it’s supposed to end!… We want JUSTICE…we want to hear that the Child Predator has been CAUGHT AND JAILED (if not SHOT AND KILLED).  We don’t want to find out that we’ve been on the lookout for an elderly woman who didn’t even do anything unkind, let alone criminal.”

But, fear not, dear Reader.  Fear not!

If you’re worried that our Hero and Heroine are planning to wipe the egg off their face and apologize for the overreaction, I was on the scene to ask whether that will happen: 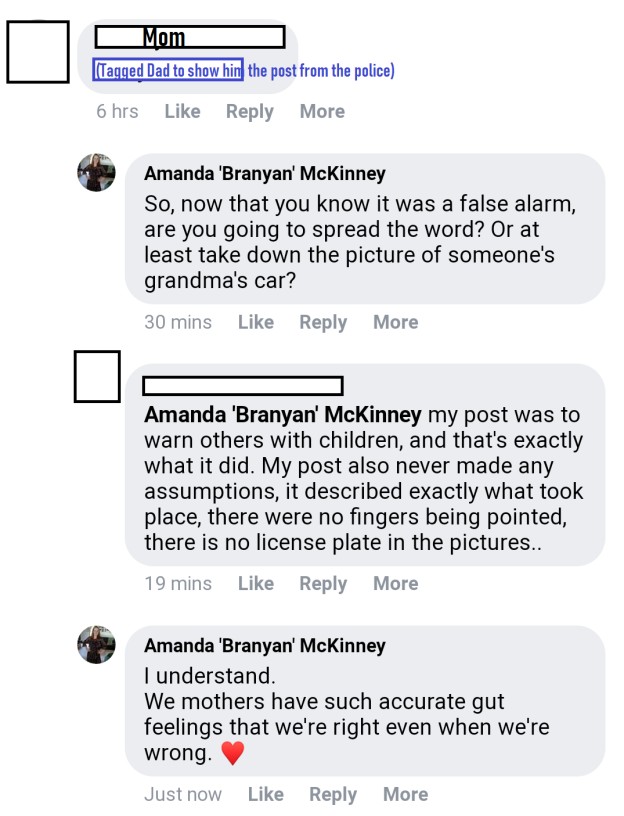 So, you see, it’s a happy ending after all…

Nobody was forced to do the mature, respectable thing by taking responsibility for their Alarmist behavior.  And everyone can take comfort in the fact that security cameras are rolling 24 hours a day in a small, Midwestern community, ensuring that we always know what color car drove past a kid on a bike at 6:00pm.

And, just in case there is anyone from the community who thinks it’s distasteful for me to share all of this on my blog, let me just explain something. My post has not made any assumptions. I’m only describing exactly what happened, there are no fingers being pointed, and there are no names in any of these pictures.

So, I don’t think I’ll be taking it down any time soon.

Plus, if you haven’t noticed, I am a mom…so my feelings about things are right even if the facts ever prove me wrong.

1 thought on “Mothers Are Right Even When They’re Wrong”