Last week, my dad wrote a letter to girls who let their boyfriends paw all over them…

It was probably tough for some young ladies to hear.  But, actually, it was a very encouraging and EMPOWERING message if you know where real, lasting confidence comes from.

Unfortunately, there are people who struggle with this truth, because holding people accountable feels kind of mean.  It feels like “ganging up” on girls to write a letter directly to them…

Sometimes empathetic Christians want to stand up for the girls and shield them from the empowerment process, because they mistakenly see it as some type of punishment. 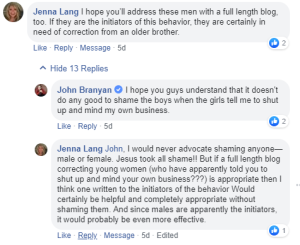 Now, it’s important to understand that I’m not sharing this screenshot (unedited) in order to PUNISH Jenna.   I’m sharing it because taking ownership for the things we say/write in public is one step in the Empowerment Process.  If I’m misunderstanding or misjudging Jenna, then I am accountable for that.  It makes me a stronger woman to dialog with people and identify disagreements and to defend the truth to the best of my ability…

…and, when I’m wrong, it makes me stronger to admit it and apologize.

But, by the same token, Jenna is accountable for the incongruent statements she makes about “shame,”  and she is accountable for devaluing the “Letter to Girls” by changing the subject toward a topic that she likes better.  (By the way, my dad DID address the boys in the original post, and he also wrote this follow-up letter to appease those who found his focus unbalanced.)

Anyway, I’m passionate about helping women like Jenna start to explore the question of where REAL empowerment comes from…because I worry that her interest in “Boys-as-Intiators” ends up weakening the girls/women in the long run.

She’s certainly not doing it intentionally!  But it’s not helpful to introduce words like “shame” into the conversation when a teen girl is being given a Dad Talk.  In that moment, remember that the Dad genuinely cares about the girl, and his confidence in her intelligence is motivating him.  For Heaven’s sake, THANK HIM for loving the girls enough to pour wisdom into them… don’t get in the way! 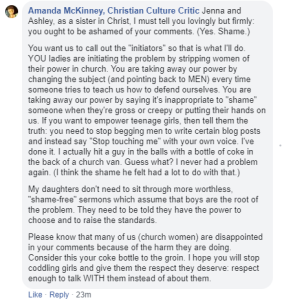 Again–it’s important to be clear:  my goal is to give both Jenna and Ashley the opportunity to DEFEND their position, or to CLARIFY their comments, or to CORRECT their view, if they no longer stand behind their original points.

But, if they are unable to do that, I suspect they are still in need of the very same Dad Talk they had a problem with…  Ironic, huh?

It truly burdens me that so many Christian women lack confidence in their beliefs…but it’s hard to help them understand that real confidence comes from being challenged over and over and over.  (Real confidence doesn’t come from asking the pastor to talk to your boyfriend for you.)

It’s frustating because insecure women sometimes lash out and/or they delete their comments.

Sometimes they even block me.

But very few are willing to learn how to take criticism and RISE to a challenge.

If we looked at disagreement as an opportunity to GROW, it would change the world.  Hundreds, maybe thousands, of women who currently feel weak and uncertain and easily-intimidated would start to come out of their shells…knowing that whether they are wrong or their opponent is wrong, the most important thing is seeking the Truth together.

I wish I had the opportunity to tell Jenna and Ashley that we are all on the same team. We’re daughters of God and sisters in Christ, who have no reason to feel squeamish when someone tries to correct us.  In fact, the Bible says a wise person LOVES correction and LOVES the opportunity to learn.

Instead of defending young girls when they are being given a lesson–we should THANK the teachers who are brave enough to empower them in a culture which calls that “sexist.”

Instead of BLOCKING a Christian sister who says, “You’re absolutely wrong about this” perhaps thank her for the chance to learn something new?

I know it’s hard.  Actually, getting along with people who think differently is a miracle of the Holy Spirit! (No joke.)

But maybe…just maybe…the next time we see a man writing a letter to the BOYS, we will have the perspective to say, “I certainly hope you plan to write a letter to the girls, as well.  They are capable of making decisions and learning from their mistakes as well. Give them the gift of correction!”

Please, please, respect women and girls enough to hold them accountable for the things they say and do.   They will be stronger for it.

1 thought on “How to Empower a Young Girl”