A friend of mine brought up the topic of “swear/curse words.”

He made a valiant effort to get Christians to think about their intent (and the state of their hearts), rather than hyperfocus on certain “naughty words.”

Personally, I’m fascinated by the topic because I have small children, who depend on ME to tell them what our culture considers “right” and “wrong.”

Every, single one of my toddlers, while learning to speak, has said a few “bad words” completely innocently… And therefore, they were not punished for what they did not know. When my 5-year-old asked excitedly, “What the hell???” I simply explained that many people would be upset if they heard him say that.

It’s only NOW (since we’ve had this conversation) that he knows the word can be offensive, and he will be in trouble if he says “hell” intending to disobey.

But on the other hand, the same boy was disciplined when he was three and kept yelling “YOU BAD!!!” when he was angry.

Any time I told him to pick up his toys or get ready for bed, he’d growl, “You bad, Mommy!”

Make no mistake, THAT’S filthy language, Folks! That little boy was cursing me–to the best of his young ability.

As the conversation on my friend’s wall continued, there were two, distinct “groups” which emerged:

Group one brought up several examples of places in the Bible where Paul and Jesus used forceful and culturally-offensive words, for teaching.

Group two said things like, “You’re just making excuses” and “we all KNOW, deep down, that you’re just defending your sin.” 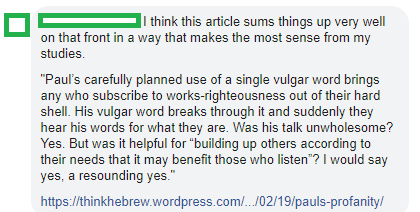 Group two continued to struggle with fear that if they agreed with any of these points, Christians were going to freely drop F-bombs in every sentence for the rest of their lives, whenever they felt like it.

So I jumped in and offered a couple more real-life examples of what happens when humans are taught to consider their ATTITUDE while speaking, instead of just the words…

“I know some kids who were taught that “I don’t care” is the worst thing you can say in frustration. I find that very thought-provoking. It seems the majority of people who throw around “swears” are doing it because they DON’T CARE enough to consider how it affects another person… Which is what makes it unholy.

True story: I once had a family member (a Christian woman) get triggered and call me just to scream. I asked, “If you won’t let me respond to any of your accusations, then why did you call?” She said, “Because! I wanted to tell you off, and I can do what I want!”  Without taking a breath, she told me I was evil and that my children are feral and that I’m a Pharisee.

Then she said “You effin think you’re perfect.” Note: that’s not censored. She actually said “effin”. 😂

Even as hurt and annoyed as I was to be dealing with a verbal attack, I still almost laughed at the irony of a church woman who is absolutely out of her mind with rage but still has the discipline to avoid saying The Big No-No.

I picture Jesus on his throne observing the whole thing and saying, “Well done, my child. You have followed my command perfectly! Don’t stop until you’ve given that Pharisee every single piece of your mind.”

Most interestingly:  this woman eventually apologized for using the words “bitch” and “jackass” during her tirade. And I accepted, because I’m looking for baby steps. But she never took responsibility for the unrighteous anger which fueled EVERY word she said in that phone call, because “You made me hurt, and I still feel that stuff is true, and you can’t invalidate my feelings.”

And that, folks, is why we need to help Church People understand that intent matters more than words.

There are individuals who think they only owe others an apology if they slip up and say one of the things on a list of Naughty Words.  But the heart matters most.

I understand the worry that people in “Group One” will abuse their freedom and start swearing like sailors for no reason. But I wish Group Two would have some faith that God can use the conviction of the Holy Spirit to hold all of us to a higher standard than that.

Yes, there are rare occassions when “checking your intention” may mean that it’s okay to say “shit” or “fuck” when you’re not cursing someone…sometimes… in the company of people whose faith won’t be destroyed in the process.

But, more often than that, asking God to “check our motivation” actually LIMITS our speech, even beyond those dirty words.

At the same time that Group Two was worried about this conversation opening the floodgates of profanity, I was actually convicted about certain phrases I’ve been using thoughtlessly as of late, such as “You’re driving me crazy!”  and “I just can’t even ________”

I plan to apologize to my kids for letting that stuff fall out of my mouth so easily–and to ask them to help me choose my words more carefully, out of love.

Furthermore,  I floated the idea that the MOST OFFENSIVE comments came when certain Christians got so frustrated with eachother that things like this happened:

Does anyone agree with me that cutting off our siblings is more unChristlike than a few friends calling eachother “bastards” for fun?

Let’s continue to discuss in the comments!