My sleep was fitful last night.

I don’t like saying “God woke me up.” But I think God wanted me to be awake. (Shout out to a few of my friends, who have been part of the conversation about assigning motives to God!  Anyone who’s interested to read it can click here.)

Anyway, regardless of whether God did the waking or not–I spent several hours just thinking and praying.

It started with some news I heard yesterday morning:

Thom’s wife–pictured above–is my friend Jenni.  She became one of my most trusted advisers in college.

Jenni was the baby of the group. Her parents let her fly across the country to a new home when she was barely 17, because they trusted her to be solid and faithful and handle all the changes with a maturity beyond her years.

Our group of friends would spend looooong hours after lunch and dinner, discussing theology, philosophy, and politics. Often the clean-up crews had to wipe our table around our elbows, while we kept talking.  Everybody else was gone.

Those conversations were good for my soul.

Whenever I asked a question of Jenni, she would look off in the distance and say “Weeeeeell…” as she considered it.  Until she inevitably concluded: “yes and no.”

Both yes and No.  Pretty much every time. And then she would thoughtfully outline both the pros and cons of my proposed theory.  Precisely the kind of discussion I love!

I haven’t been able to see Jenni face-to-face in almost a decade. But she influenced me in such a way that I will always call her Friend.

That’s why hearing there’s a tumor…it felt personal. I had to read it several times to make sure I understood.

This isn’t a cousin’s girlfriend’s mother.

She’s not even 30 yet; just became a mom.  Things she has said and done have shaped who I am.  What in the world does God think He’s doing?

I can only imagine what her husband, parents, and church family are going through.

These are just some of the things I was thinking around 3:00 this morning, when I was trying to figure out what I can DO in a situation like this.

Is it really very serious? Will she need a miracle? Should we pray, simply and generically, for God’s will to be done, as if that won’t be already?

Thom’s words about God using this trial for encouragement and growth ring completely true…but just what type of “growth” are we going to be experiencing?

When it’s all said and done, will we be thanking God for his mercy? For allowing a young mother to have many, many more years on the earth, serving her Heavenly Father?

Or will we be praising Him for the example of a race well-run…and for bringing his faithful servant home? 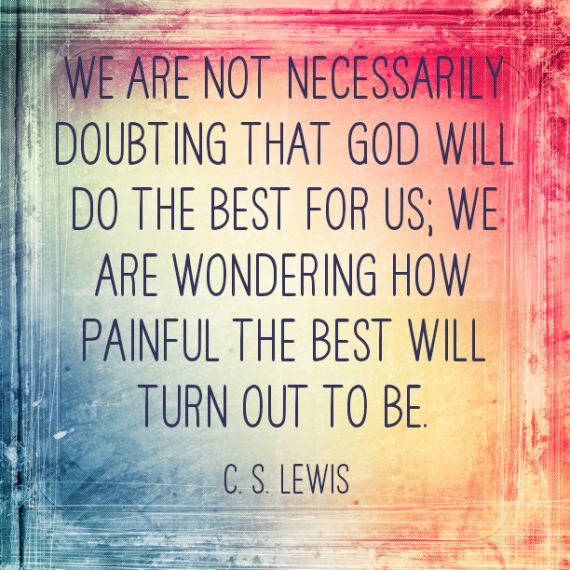 As usual, Clive nails it.

Yes–God will do his best.  But, how painful will it be, oh Lord?

How much suffering should we be gearing up for here?

God, give my friend Jenni the patience to take it one day at a time, while you write the rest of this story.  And give the rest of us the wisdom to support her in a way that ultimately brings glory to YOU.

Just before I finally drifted back to sleep, I was reminded of what I already knew:  God loves “our Jenni” far, far more than I do…

I don’t understand exactly what He’s thinking. But it seems that Jenni’s Heavenly Father has made a decision very similar to what her earthly parents did years ago…

He’s letting his young daughter take a long trip, into an uncertain future, because he trusts her to be solid and faithful and to handle all the changes with a maturity beyond her years.

It was a privilege to be part of Jenni’s first journey.  And I expect those around her will get to witness God’s best play out in her life, once again.

For an example of Jenni’s thoughtfulness, you can check out her blog. She doesn’t write often, but this was the first post:  an introduction and a quest.