I’m not a huge fan of Psychology Today, but I found this article interesting, on The Blurred Line Between Victims and Abusers:

“In our Age of Entitlement, it is often difficult for friends and therapists to detect abuse in intimate relationships and to discern who the primary abuser is. “

Why is it difficult to figure out who the abuser is?

Well, because–according to the article–the person saying “I’M BEING ABUSED” often is the guilty one.

Let that sink in for a minute.

Research and clinical experience clearly indicates that abusers are likely to:

• Hide, minimize, or justify their [own] abusive behavior toward others

• Describe themselves as victims

• Label their partners’ behavior as abusive

Does this surprise you?

Do you disagree with this psychologist? (It certainly wouldn’t be the first time the opinion of a psych professional was wrong.) 😉

If he’s correct, then a fair number of the people who are posting about their “Narcissistic” ex-partner on Facebook are the ones playing the role of the active abuser in their relationships… 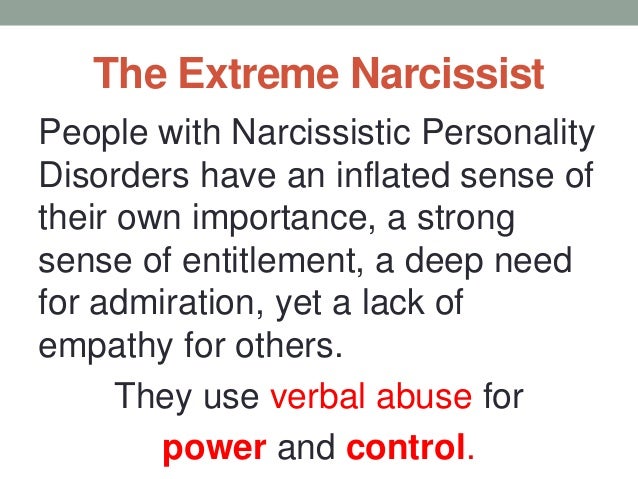 When people post memes like this to earn sympathy and to turn their friends against their partner (who will not be allowed to defend himself), they need to take a look in the mirror.

At some point, repeatedly calling someone a narcissist or an abuser IS VERBAL ABUSE.

On the other hand, the article claims that VICTIMS are more likely to:

Perhaps the problem is that most of us will be both a victim and an abuser, at different times in our lives.

In many cases, relationships consist of TWO, selfish, blame-sharing individuals, both scouring the internet for validation that their partner is more wrong than they are…

(And, as I’ve written about before, our beliefs about what kind of damage or symptoms we’ll have tend to become self-fulfilling prophesies. If we WANT to believe we’re being abused, we can do it.)

American psychology makes it very easy to blame others entirely for our own awful behavior… And then all our Facebook friends can watch the meme wars between us and our ex. So, who do we believe?

At what point does an abused person become the abuser?

Maybe, for all our fancy terms and definitions, we’re no closer to solving the problem of sin nature and human selfishness than we were a thousand years ago. Sure, cultures have shifted and changed a bit over time. But are things really BETTER now?

“In the beginning of my career, I saw many male abuse victims who would become angry and verbally aggressive at the suggestion that their partners were abusing them. Now obvious victims, along with those who are not victims but who have identified with descriptions in self-help books, become angry and aggressive if they are not recognized as victims.”

I’m tempted to testify that I’ve seen this scenario play out in real life.

But, then, would that be a somewhat selfish thing to do–trying to gain sympathy from others for the abuse I’ve suffered?

It’s complicated. And the moment we see ourselves as victims, we run the risk of flipping the script and using that victimhood to BE THE BULLY and abuser.

Again, I think all of us have the capacity to be either or both, at different times.

But what do you think?