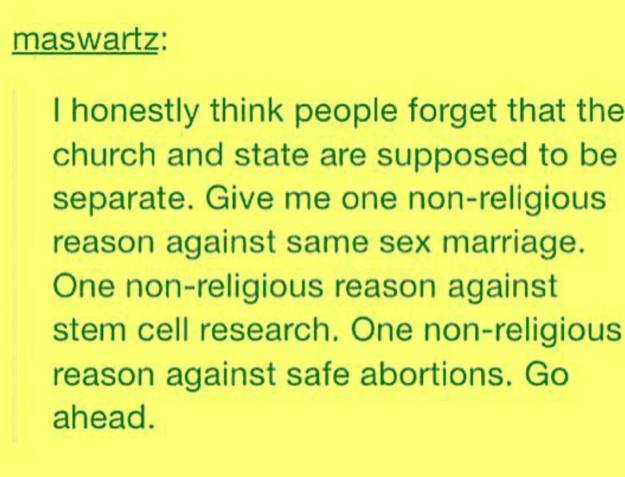 I’m not even mad that people still throw around the “church and state” phrase without knowing where it comes from. (Go ahead: point to a law that says religion can’t influence laws. Go ahead.)

But, I’ll admit, it bugs me when people think their views on gay marriage and abortion don’t count as “religious,” just because they don’t believe in God.

Too many ignorant Americans actually believe there is such thing as a law that is non-religious.

Because their opinion that there’s nothing wrong with same-sex marriage and abortion come from their moral beliefs, too…

Those opinions aren’t automatically logical and scientific and objective, just because you don’t believe in God.

All laws are about figuring out what’s right vs. what’s wrong, and that will always be a religious question.

So, please don’t share this meme, or mindlessly utter the phrase “separation of church and state,” anymore.  Please?

I get it. You don’t understand laws, and you’ve never read the Constitution (or anything longer than this blog post), and you think that when you quote your gay friend who had an abortion it makes your opinion more valuable than someone who quotes the Bible.

But, you look silly, because your sense of morality comes from the religion of your culture, too.

41 thoughts on “All Laws Are Religious”