I was blocked by somebody on Facebook this week.

Mind you, that’s different from simply being unfollowed or unfriended.  By blocking someone, you prevent them from seeing ANYTHING related to you, even things you’ve written on public pages. A blocked person can no longer search for your profile or contact you via private message.

You’re dead to them.

In truth, “blocking” is a great tool if you run into a child predator or potential ax-murderer.

But what other reason could a person possibly have for so dramatically cutting me off?

The irony this time was that my last conversation with Blocky McBlockerson* had to do with censorship.

(*name has been changed to protect the cowardly)

Me: I’m baffled by anyone who thinks discussing things is a “distraction.”  If…your philosophy about sexuality is wrong, then deleting comments keeps others from seeing the truth..

Blocky:  Go ahead and discuss it on your page.  I don’t enjoy debate. It takes too much energy.

Me: Someone who knows what they believe doesn’t shy away from explaining themselves.   In my opinion, the least loving thing you can do for a person is withhold the truth when they’re honestly seeking.  A philosophy that doesn’t pass the test of BOTH the heart and the mind isn’t worth having.

At this point, Blocky decided to try a different approach. She never explained why she liked the ridiculous meme she had shared (and why I was wrong to suggest that adulterers and pedophiles could use the same meme.)

Instead, she opted for self-pity.

Blocky: I guess I just don’t measure up. Fortunately, my faith allows for people to be whoever they may be and still be of use.  Maybe in a few years, after a few life experiences, you’ll be less rigid in your judgment… If you were my kid and you wanted to talk about what Mom has learned or believes, I’d be happy to talk.  That’s not what this is, and I’m not interested…

Me: I’m not your kid. But I am your sister, am I not? It’s true, you may just choose not to discuss certain things on Facebook. You may have people in “real life” who are allowed to question the areas of your faith that don’t make logical sense. But—again—people who have answers for my questions usually offer them.

That’s when she got really upset!  And that’s okay.  I don’t necessarily believe that being upset with each other is a bad thing. In fact, you can’t have relationships without being upset sometimes…

Blocky: In my experience, people who ask like you do NOT have questions, they have answers. So…your like-minded inner circle, would be the places that your questions/conclusions should be shared. They are only agitation in my little corner. So cut it out… An honest, face-to-face, heartfelt exchange is fuel for my soul. But confrontational, argumentative debate is an energy suck that I can’t afford…and with that, this and any future conversation (in this forum) is over. My boundary has been reached.

But that last bit is the problem for me.

Saying, “That’s it. I won’t talk with you” and offering no explanation for why strikes me as downright contradictory.

So I told her so.

Me: If we were sitting face-to-face, having a heartfelt exchange, I would confess that I don’t know how to move forward. I’m completely stumped about how to have a relationship with a person like you, without being both rejected AND accused of only associating with people who agree with me.

I already said it’s possible that Facebook just isn’t your preferred place for theological discussion. That’s fine. But it’s the only place I have to hear other views…

How do I break free from my “like-minded circle,” when I’m unceremoniously barred from circles like yours? Regularly?

It’s frustrating to meet person after person who has a problem with the WAY I talk….and never wants to address the crux of my points.  You say you’re dropping out of this conversation, but I hope you’ll reconsider. I hope you’re not putting up a boundary between yourself and a God-indwelt member of your spiritual family every time relating with one becomes a challenge…

And that’s when she decided she needed to make sure we never talked again.

During a conversation about the importance of hearing other perspectives, she essentially stuck her fingers in her ears and yelled “lalalala!”

But I’m afraid that blocking ourselves from confrontation is becoming a Standard Operation for Christians.

It seems that “tolerant” Christians are happy to have coffee with gay people or support the unwed mother… They’re happy to get messy being the hands of Jesus to the tax-collectors. But, when it comes to loving other Christians, they need BOUNDARIES.

At least two church leaders recently unfriended a relative of mine, over disagreements about racism.  And the former “Youth Director” of my childhood church dropped into a pretty mild discussion on my page about marriage, before burning our bridge.

Meanwhile, I’ve been bantering with Atheists on my dad’s blog for weeks–and they just keep coming back for more.

…but they can’t help returning.  They come back over and over, like moths to flame.

I remarked to my dad, “It’s like the Gospel is a bug zapper.”   The lost souls are relentlessly drawn to the light, even though it shocks their flesh.

But they’re compelled…as if they sense on a subconscious level that truth is waiting.

Is there more hope for the rebellious pagan than for the half-hearted members of our own churches?

Have we grown so attached to our religion that we must block anything that threatens it?

If we’re so sure we’ve found the truth, then why do we need to protect it like a glass sculpture?

Iron will not sharpen iron if we keep burying our swords. Over and over, I see Christians making “tolerance” and “diversity” into gods–then cutting off the brothers and sisters who try to warn them.

That’s not tolerance OR diversity, brothers and sisters. And I believe I’m well within my right to point that out.

Are we family, or not?

And what does it say about the things we believe, if we come undone when an arrogant, pestering little sister holds our feet to the fire? 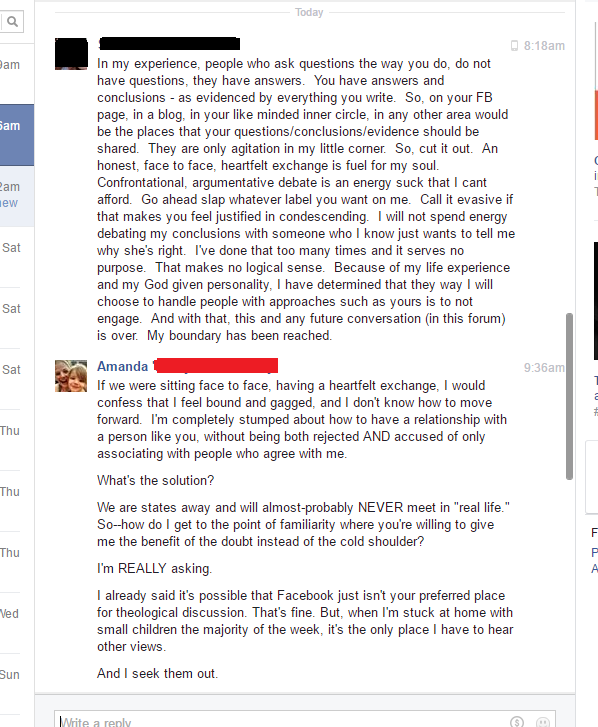